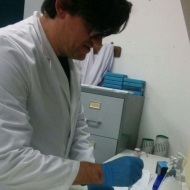 2016 (Jun)-present. Visiting Scientist at the University of Huddersfield, UK.

2015(Aug)-2015(Nov). Associate Professor of Genetics at the Dept. of Chemistry, Biology and Biotechnology, University of Perugia.

2008-2015(Jul). Ricercatore (Assistant Professor of Genetics) at the University of Perugia.

2004-2007. Post Doctoral Fellow at the Dept. of Genetics and Microbiology. University of Pavia.

2001-2004. Ph.D. Student of Genetic and Biomolecular Science. University of Pavia.

2000-2001. Undergraduate Internship at the Genetic Lab of the Dept. of Cellular and Environmental Biology. University of Perugia.

2013-2015. Member of the Scientific Board for the PhD program in “Biotechnology”. Univ. of Perugia.

2011-2014. Member of the Scientific Board for the PhD program in “Biology and Ecology”. Univ. of Perugia.

2012-present. Member of the Editorial board of PLoS ONE.

2003-present. Member of the following Professional Societies: American Society of Human Genetics (from 2008); Italian Society for Evolutionary Biology (from 2006); Italian Genetics Association (from 2003).

2008-2011 (7 months). Visiting Scientist at SMGF and University of Utah (USA) to collaborate in different projects on the origin of Native American populations.

2007 (from July to September). Visiting Scientist at SMGF (Utah, USA) to set up a database of ~80.000 mtDNAs and to develop efficient haplogroup prediction tools.

2012-present. Unit Coordinator for the MIUR project FIRB – Futuro in Ricerca 2012 entitled “The genetic history of Italy as traced by genomic analysis of humans and domesticated animals” (cod. RBFR126B8I_002).

2011-2013. Collaborator for the National Geographic Grant 2011: “Horse domestication in the ancient Near East”.

Dr. Alessandro Achilli’s research activity is mainly dedicated to: (1) the analysis of mitochondrial DNA and nuclear DNA sequence variation with the aim of better defining origins, evolution and dispersal patterns of human and animal populations; (2) the definition of the role played by the human and animal genome sequence variation in association studies; (3) the application of mtDNA surveys in forensic genetics.

Ranked at pos.82 among the Top Italian Scientists (http://www.topitalianscientists.org/top_italian_scientists.aspx).

Genomics of Human and Animal Populations

An interdisciplinary approach to reconstruct the human history